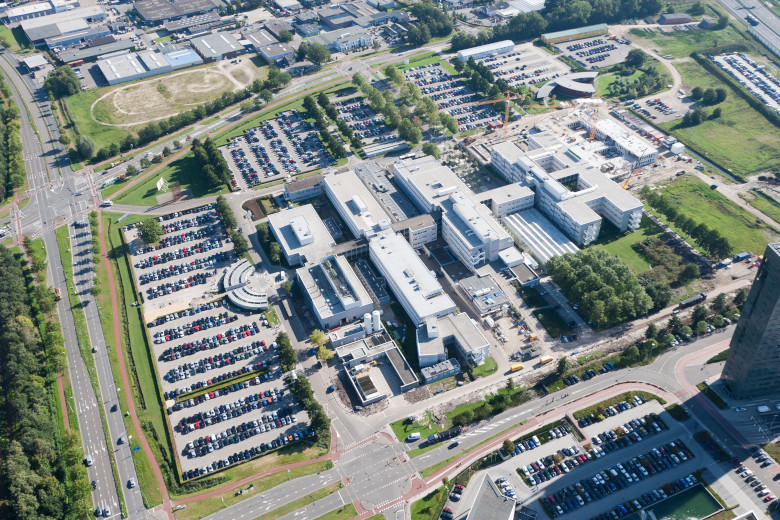 The Maxima Medical Center’s branch in Veldhoven has been expanded with an auditorium, an admittance desk, a library/study room, meeting rooms and an expansion of the catering facilities. All these functions are being separately accommodated in the glass-covered space and inner courtyard. The expansion of the catering services have been partially realised as a terrace on the courtyard. One of the meeting rooms is designed as a half-open space.

All building volumes are fully air-conditioned and thermally insulated. The required ventilation is supplied mechanically and the return air is being let out through the courtyard. Radiation compensation is added at the locations of the terrace and the foyer in front of the auditorium, in order to compensate for the relatively low air temperatures during winter. On top of that, the façade of the inner courtyard is fitted with double glazing, to keep the energy consumption at an acceptable level (temperatures in the indoor courtyard will not fall below 17 °C). The supplied ventilation air can be cooled down when required. The openings in the façade and roof of the courtyard have been designed in such a way, that the indoor temperature on a sunny day will be limited to a maximum of 2 °C above the outdoor temperature.

The auditorium and the meeting rooms have an as open as possible connection to the courtyard. Because of this, acoustic facilities and deviating constructions had to be applied. For example, the overflow from auditorium to the courtyard had on the one hand be able to process enough volume, and on the other hand be sufficiently noise absorbent. With this, we also took in account the positioning of this facility.

Taking in account the function as a hospital, we had a particular focus on fire safety of the building. The courtyard is constructed in such a way that, in the event of a fire, the space acts as an open space. This means that smoke and heat are extracted in to such an extent, that the degree of visibility and ability of passage is not affected.