Railway bridge over A1 highway

Commissioned by SAAone EPCM Bouwcombinatie V.O.F in Diemen, we researched the expected noise emission of a projected railway bridge that would cross over the A1 highway near Muiderberg. The existing concrete railway bridge, part of the railway line between Amsterdam and Almere, was replaced in 2016. To create sufficient space and flexibility for the positioning of the road traffic lanes of the A1, a bridge without intermediate supports was required, which resulted in a span of 250 meters. The bridge is positioned on a relative short distance from residential areas. Acoustically the bridge was not allowed to produce more noise than the existing concrete bridge.

Because of the required large span and the tight noise demands, it was recommended to make a steel bridge consisting of steel girders and arches and a concrete deck. The tracks are connected to concrete railway sleepers, embedded in ballast. A ballast mat was fitted between the concrete deck and the ballast, in order to limit the vibrations in the concrete deck caused by the trains. During the tender phase, we advised the client regarding the choice for a steel and concrete bridge, the optimalisation of the design and we gave an indication of the sound radiation (so called "bridge correction"), based on data from earlier experience and literature.

During the design phase, we developed a numerical model, based on the Finite-Element-Method (FEM), to be able to determine the vibration response and the sound capacity that radiates from the bridge. For the input of the vibrations, a second model has been created of an existing railway bridge for reference, the IJsselspoorbrug near Hattem. We conducted measurements on noise and vibrations on this bridge. Using these measurements and calculations, we determined the expected bridge correction for the new bridge at Muiderberg. Based on the results of the calculations, the design of the bridge was optimized. 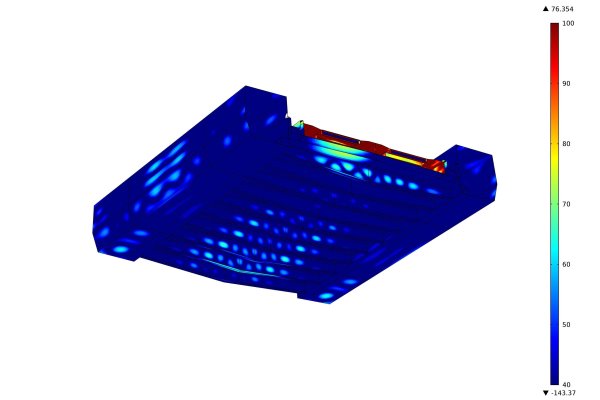