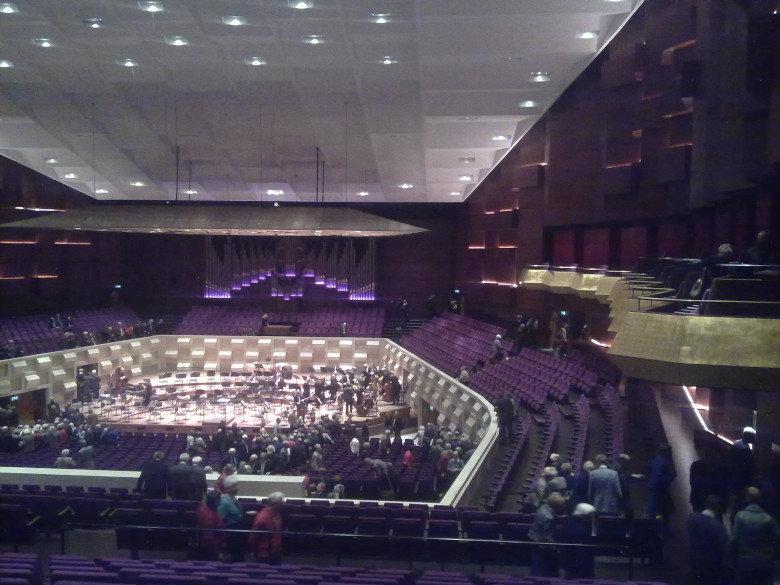 The main hall of De Doelen, Rotterdam, the Netherlands, is a concert hall for classical music with a volume of about 26,000 m³ and a seating capacity of 2,242. The hall opened in 1966. In 2009 the hall is renovated. As a part of the renovation the room acoustics of the hall have been improved.

The main alteration is the stage canopy. Based on subjective research, combined with extensive measurements in several halls, a stage reflector was proposed and incorporated in the design. This reflector takes over the function of the reflectors that were present from 1966 to 1973 and are integrated in a technical ceiling that conceals the lighting and audio. The technical ceiling has a fixed operating position but is movable (up for organ concertos, down for maintenance).

Extensive research in the laboratories of Peutz

The stage reflector was optimised using both computer models and research with a scale model 1:10.
Also the acoustics in the audience area have been improved. By increasing the mass of the ceiling and reducing the absorption of the seats especially the low frequency reverberation was enhanced, giving the hall more warmth. Absorption of wall, ceiling and seats was tested by laboratory measurements.

Other adjustments of the room

The last rows of the hall have been removed, to eliminate the seats that were too much outside the acoustical volume of the hall. This repositioning of the rear wall gives the hall a clear reflecting rear wall with which the strength and envelopment is increased, especially in the rear of the audience area. Special care is given to avoid extra sound absorption due to the many new openings in walls and ceiling for lighting. The air conditioning system has been reversed. Air supply is now provided from the floor, using air inlets that were optimised based on laboratory research on sound production and draught, in a climatic chamber.
An invisible speech enhancement system was designed, calculated and implemented and the music amplification system was optimized. When not in use, the line arrays are retracted above the ceiling.