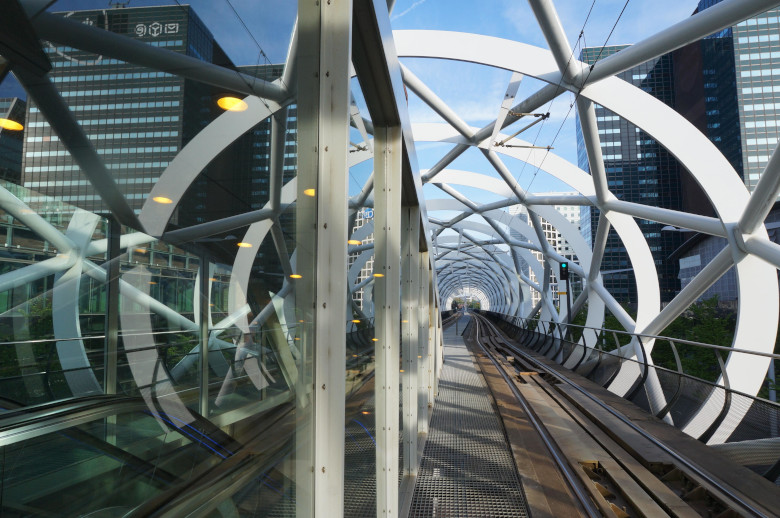 Randstadrail is a so-called lightrail concept, where the trains can be used on both tram tracks and train tracks, between The Hague, Zoetermeer and Rotterdam. The track part at Beatrixlaan connects the Zoetermeer line to the tram network of The Hague. At the site of the Prinses Beatrixlaan, the line is located 6.5 meters above ground.  This consists of a steel, fishnet-like structure that supports a concrete deck for the track. A glass-roofed station was added to the line.

Measurements of noise and vibrations

The goal of the research was to achieve that a passing train would not cause any annoyance for any passers-by underneath the track route or for the surrounding buildings (which include a conservatory and residences).
In order to determine the levels of noise and vibrations, a simulation model was constructed in the design phase. The calculations were double checked by doing noise and vibration measurements on several existing tram and metro tracks. For these calculations, an arithmetical model was used, based on a mass spring model of the constructions. Based on the calculation results it was recommended to integrate a concrete counter mass inside the light steel construction, to reduce the vibration excitation.
The occurring sound load of the surrounding buildings caused by the train traffic has been examined. At the same time, the accumulation of noise, caused by train traffic together with road traffic, has been taken in account.

The tests on wind climate and wind load on the glass roof has been done in Peutz’s wind tunnel. Summer temperatures in the station and the elevators have been determined based on dynamic temperature calculations. As part of the fire safety consultancy, a simulation was done using smoke filling time models, to simulate the extraction of smoke and heat. Also evacuation simulations were performed.
Specifically for this project a calculation model was developed to predict the temperatures in the steel structure in case of a burning train carriage. Using this data, the constructor calculated the rigidity of the construction in the event of a fire.

Based on the measurements and calculations, we gave several recommendations in order to limit the occurring levels of noise and vibrations for the surrounding buildings. The most important measure, implemented early in the design process, was providing the steel fishnet-like structure with a concrete bottom, in order to limit the vibrations (and with that the sound emission).
Regarding the station we made recommendations regarding the room acoustics. Based on the temperature calculations and the wind tunnel testing, the roof structure was optimized. Peutz also made recommendations regarding the quality of the glass façade of the station, in collaboration with Peutz Geveltechniek.